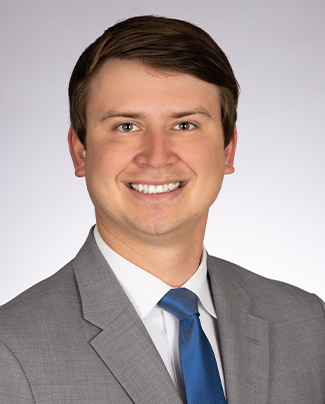 For Joey DeMartin, officially joining the team at Hardison & Cochran, Attorneys at Law feels like a homecoming. He worked at the law firm, writing motions and assisting in the call center while attending Campbell Law School in Raleigh.

DeMartin graduated from the Norman Adrian Wiggins School of Law at Campbell University in 2018 and passed the North Carolina Bar Exam in 2019. The Washington, N.C., native is the first attorney in his family.

“My grandfather was pretty happy with that,” DeMartin said, noting that the law had interested him from a young age. “I was definitely the family debater. … I was always good at finding my point and getting it across to the other side.”

DeMartin was an avid soccer player at Green Hope High School in Cary and even played Division III soccer as a center back at Waynesburg University in Waynesburg, Pa., before transferring to Appalachian State University in Boone, N.C., to be closer to his family. He graduated with a Bachelor of Science degree in criminal justice in 2015.

DeMartin received one of 123 Juris Doctor degrees conferred in 2018 at the 40th annual graduation ceremony at Campbell Law. He was among the recent graduates who this summer enabled the school to achieve its highest first-time pass rate—92 percent—on the North Carolina Bar Exam in nearly a decade.

Between focusing on academics, DeMartin interned at a real estate law firm and a criminal and family law firm, handling child neglect and juvenile cases. He said he has enjoyed his time at Hardison & Cochran, helping to secure workers’ compensation benefits for people who have been injured.

“I really feel like I’ve found my niche,” he said.

“I feel like I’m in the right place right now,” he said. “It’s been nice to help out the community and put people in a better position than when they called us.”

DeMartin made the Dean’s List during his first year of law school and graduated with honors. His fiancée, Paige Casey, is a registered nurse at WakeMed Hospital in Raleigh. A November wedding is planned.

In his off-hours, DeMartin likes spending time on the water and especially enjoys the water sport of wakeboarding. He continues to follow professional soccer, especially FC Barcelona and the Tottenham Hotspur Football Club. He also watches the National Football League, enduring good-natured ribbing over his support of the New England Patriots. His paternal grandmother, who is from Connecticut, sparked his interest in the NFL, so he’s loyal to the team she likes, he said.

He’s looking forward to growing with the legal team at Hardison & Cochran while assisting injured workers in need of assistance with workers’ compensation claims.