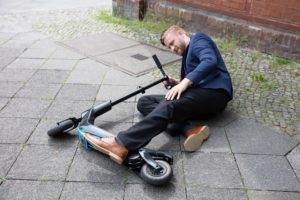 Despite a changing cast of electric scooter rental companies in Raleigh, data from N.C. Division of Motor Vehicles show e-scooter accidents continue to cause harm across North Carolina.

How Dangerous Are Electric Scooters?

A Charlotte Observer report says there were 35 injuries reported in electric scooter crashes in Raleigh and Charlotte from January 2018 through May of this year. The scooter accident injuries were among 82 total crashes reported in Charlotte, Raleigh, Winston-Salem and Greensboro that involved scooters assumed to be rentals.

The report said that scooters are involved in crashes with greater frequency than cars and trucks and nearly half of the scooter crashes resulted in obvious injuries.

Fortunately, there have been no scooter accident fatalities reported in North Carolina, though they have occurred elsewhere. Consumer Reports said in June at least eight people in the U.S. have died while using a rentable e-scooter since the fall of 2017.

As personal injury attorneys in Raleigh, Hardison & Cochran has been monitoring the rise in e-scooter use and resulting injuries since they first appeared on downtown streets in July 2018. If you or a loved one has suffered injuries in a scooter accident in Raleigh, one of our experienced accident attorneys is available to review the details of your accident and injuries and discuss your legal options for pursuing compensation for your medical bills.

Recently, the country’s largest e-scooter rental companies, Bird and Lime, left Raleigh. Gotcha, a Charleston, South Carolina-based company, is to deploy 500 scooters here this summer and may eventually be allowed to have 1,000 scooters available for rent in Raleigh streets, according to WRAL.

Gotcha scooters are currently in use in Durham and on the campuses of UNC-Chapel Hill, UNC-Charlotte, UNC-Wilmington, and East Carolina University, and in more than 20 other states, according to the company.

A bill pending in the North Carolina General Assembly would classify scooters as vehicles, which would prohibit municipalities from banning them. Cities would be allowed to regulate their use, such as preventing people from riding scooters on city sidewalks and prohibiting scooter companies on public safety grounds.

Our earlier blog post about rentable electric scooters noted that emergency responders in Raleigh had answered more than 20 calls about Bird and Lime scooter accidents that caused injuries during the first several months they were available for rent here. Raleigh police said electric scooters were involved in 31 crashes from July through December 2018.

The Charlotte Observer report says statewide crash data show three collisions — one in Charlotte and two in Raleigh — resulted in incapacitating injuries during the 17 months of January 2018 through May 2019.

Another 34 crashes resulted in evident injuries, including 15 in Charlotte, 17 in Raleigh and one each in Winston-Salem and Greensboro. Charlotte had 18 crashes and Raleigh five in which reports said injuries were possible. Another 17 crashes in the two cities caused only property damage.

The e-scooter crash rate is more than eight times the 3.4 motor vehicle crashes per 1 million miles in Charlotte based on three-year averages reported in 2017. Car crashes with non-fatal injuries occur at only 0.9 per million miles.

Our earlier blog post about rentable electric scooters noted that emergency responders in Raleigh had answered more than 20 calls about Bird and Lime scooter accidents that caused injuries during the first several months they were available for rent here. Raleigh police said electric scooters were involved in 31 crashes from July through December 2018.

Recently, the Washington Post reported the story of a Chicago bicyclist knocked unconscious and severely injured in a hit-and-run accident allegedly caused by an e-scooter rider. “Although e-scooter riders make up the bulk of injuries associated with the devices, according to injury statistics, hit-and-run victims have emerged in numerous cities across the country, and their injuries are often severe,” the Post says.

An analysis of e-scooter accidents conducted by the University of California Los Angeles and published in the medical journal JAMA Network Open focused on two UCLA-affiliated hospital emergency rooms from September 2017 through August 2018 and found 249 people involved in e-scooter accidents requiring medical care.

The most common accidents seen at the UCLA hospitals over the course of a year were falls, collisions with objects and riders being struck by a motor vehicle or another object.

Almost all of the patients were discharged and sent home from the emergency room. Of 15 patients hospitalized, two were admitted to the intensive care unit with traumatic brain injuries (TBIs).

There’s no doubt about the risk of serious injury posed by e-scooters to riders as well as to innocent people who encounter negligent, reckless or otherwise unsafe scooter riders. If you or a loved one has been injured in a scooter accident caused by someone else, you may be entitled to seek compensation for your medical bills, pain and suffering and other losses.

If you have been injured in a scooter accident that was not your fault, contact the Raleigh scooter accident lawyers at Hardison & Cochran today. We can review your case at no charge and, if we are able, will aggressively pursue maximum compensation for your injuries and other losses.