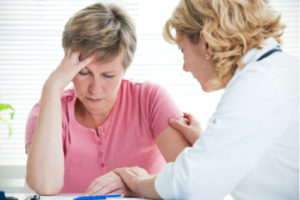 The Social Security Administration (SSA) defines a disabling mental condition as one that keeps you from being able to work and which has lasted or is expected to last for at least 12 months.

SSA statistics show that nearly a fifth of all disability benefits claims awarded each year are to people suffering from this type of condition.

The following are examples found in the SSA’s “Blue Book.” This book lists impairments that are considered severe enough that an individual suffering from one is “disabled” as a matter of law, and it describes the medical evidence need to establish that you suffer from this impairment.

These are disorders that are caused by a physical illness or disease rather than a psychiatric illness. An example is Alzheimer’s Disease or symptoms brought on by traumatic brain injury (TBI) such as difficulty with concentrating, thinking clearly or remembering new information.

Schizophrenic, Paranoid and Other Psychotic Disorders

Schizophrenia is a rare but serious mental disorder. It generally is marked by a person losing touch with reality. Symptoms generally appear between the ages of 16 and 30. The signs may appear later in men than women. They include:

These are also called “mood disorders.” Examples include depression, loss of interest in activities, loss of appetite (with weight fluctuations), suicidal thoughts or hyperactivity.

The SSA generally requires a showing that the individual falls within one of four categories:

Post-traumatic stress disorder (PTSD) could fall within this category. This is often caused by experiencing a traumatic event or witnessing one. Other examples of anxiety-related disorders are persistent, irrational fear or recurring panic attacks.

The SSA defines these as “physical symptoms for which there are no demonstrable organic findings or known physiological mechanisms.” For instance, a person may inexplicably lose their sense of vision, speech or hearing or the use of a limb.

The SSA states that an “unrealistic interpretation of physical signs or sensations” or a “preoccupation or a belief that one has a serious disease or injury” also are signs.

These disorders generally include the inability to function in social settings such as being withdrawn, pathologically suspicious or hostile, overly aggressive or impulsive and damaging behavior.

Alcoholism or drug addiction may be considered a disability. To be a qualifying disability, one’s addiction must lead to behavioral or physical changes, including depression, anxiety, liver damage, gastritis, pancreatitis or seizures.

Autism is a mental disorder that is marked by difficulties a person has with communicating and interacting socially. It may also be marked by making repeated body movements or repeating the same words over and over again. Asperger’s Syndrome is a mild form of autism.

Demonstrating a person’s mental illness can be a tough and complex undertaking. Such a claim might rely on showing that a physical injury led to the person’s psychological impairment. It may also rely on proving that an emotional stimulus caused a psychological reaction and disability. A violent act such as an explosion or the collapse of scaffolding that led to workers’ deaths, for example, could cause post-traumatic stress disorder in one who witnessed the event.

An experienced North Carolina Social Security Disability lawyer who understands the SSD benefits claims system will know how to document and demonstrate one’s mental health and present it to an administrative law judge so that you get the benefits you need to survive.

Our Raleigh Mental Illness Lawyers Are Ready To Help

Hardison & Cochran handles many injury and Social Security Disability cases in North Carolina in which a person suffers from mental illness or other serious mental health issues. If you or a loved one needs a lawyer to handle your SSD benefits claim, make sure your attorney has experience representing clients who suffer from mental illness. Contact Hardison & Cochran today online or by calling (800) 434-8399 to schedule a free consultation. We’ll respond within 24 hours.

We can help to collect the evidence you need to prove your case.