Tips to Avoid Hitting Deer and Wildlife With Your Vehicle 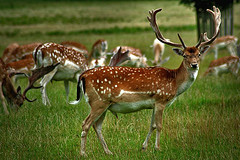 While deer/ wildlife and vehicle collisions can happen at any time of the year, the majority of the accidents happen between the months of October and December. The main reasons for this include mating season and hunting season says the North Carolina Department of Transportation. The NC DOT also states that the majority of deer/ wildlife collisions happen between 5:00 p.m and 7:00 a.m. due to limited lighting.

Along with offering stats, the NC DOT offers the following tips to avoid having an accident with a deer this fall:

In addition to the above safety tips, SmartMotorist.com offers the following tips on avoiding hitting a deer:

According to this map by State Farm Mutual, North Carolina is a “high-risk state” when it comes to a vehicle colliding with a deer. State Farm Mutual has also published a state-by-state spreadsheet of how they determined the numbers viewed in the aforementioned map.

Bottom line, like it is with any aspect of driving a vehicle safely, keep your speed safe and be on the look out.