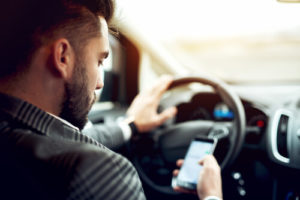 Below are six sometimes-forgotten driving safety tips that will likely make you think, “Yes, of course.”

Reminders are always helpful, and we at Hardison & Cochran Attorneys at Law in Raleigh, NC, hope these important road safety tips will prove beneficial to you or someone you care about.

Do Away with Distractions

The use of cellphones and texting while behind the wheel have been huge safety topics for a decade or more. But there are many ways to be dangerously distracted while driving. Taking your eyes off the road for even a few seconds means covering dozens of car lengths without seeing what is happening ahead of you. If you think about it as like driving with your eyes closed, it’s chilling.

Most phones today have a “driving mode” setting, which will keep it from alerting you to new messages when the phone senses the movement of an automobile. Having the phone set on driving mode setting is a great start. But keep in mind other potential distractions, such eating food while driving, drinking coffee, talking to passengers, or paying attention to pets in the car.

Avoid as many distractions as possible while behind the wheel. Science shows that multitasking doesn’t work. Attempting to multi-task can be dangerous if driving is one of your tasks. Make sure you are focused on driving when you get behind the wheel. It will be much less stressful, as well as safer.

When you are changing lanes, you glance in the side view and rearview mirrors to look for traffic before proceeding. But it’s a dangerous habit to rely only on the mirrors when changing lanes.

The reason is the sideview mirrors may not show a car or motorcycle hidden in your car’s blind spots. There are blinds pots on both sides of the car.

When changing lanes, you need to put on your turn signal to indicate your intent, then you need to turn your head and do a quick visual check of the blind spot on the side of your car to confirm that the lane is clear before merging into that lane.

Doing a shoulder check will help keep you from causing an accident by improperly merging into an occupied lane of traffic. Don’t forget the shoulder check!

Pulling on and clicking a lap and shoulder belt when you sit in your car should be second nature by now. Yet, the National Highway Traffic Safety Administration says that 41% of the people killed in car and truck accidents in North Carolina in 2018 were not wearing seat belts.

Make a conscious effort to strap on a seat belt before you start the car. Before you know it, you will do it every time without thinking about it.

Yes, of course, you should avoid drinking alcohol and driving or partaking of mood-altering drugs and driving.

Look beyond the obvious as well. The Food and Drug Administration (FDA) says many prescription and over-the-counter (OTC) medicines can cause side effects and reactions that can make it unsafe to drive.

The FDA specifically warns about:

Drive When Alert and Well Rested

If drugs or other stimulants such as caffeine are part of your driving routine, you’re doing it wrong and putting yourself at risk.

Fatigued or “drowsy” driving is another kind of impaired driving that can be as deadly as driving under the influence of sedatives such as alcohol. The problem with being sleepy is that you can’t always feel sleepiness coming on. Once you are struggling to keep your eyes open, your ability to recognize traffic hazards is slowed and you are in danger of a crash.

According to the National Sleep Foundation, their Sleep in America poll found that 60% of Americans have driven while feeling sleepy and 37% admit to having fallen asleep at the wheel in the prior year.

Be careful about driving during periods of time such as late at night when you would normally be asleep. You may be more susceptible to falling asleep behind the wheel during these hours.

Get a good night’s sleep before driving, whether it’s a short commute, errands around town or a long trip.

Healthy adults need between 7 and 9 hours of sleep per night, the Sleep Foundation says. Teens need even more sleep to enable their growth and development. People over 65 should get 7 to 8 hours per night.

Don’t Feed the Need for Speed

Slow down. The NHTSA’s traffic fatality data for 2018 says that nearly one in four traffic deaths in North Carolina was speeding related.

People are dying in car accidents because of drivers who are in a hurry to get to their destination a few minutes sooner or who just driving fast for the thrill of it. Leave early and give yourself a few extra minutes so you want feel pressured to speed.

Speeding endangers not only the life of the speeder and their passengers, but all of the people sharing the road, the NHTSA says.

Speed is also a safety issue if you are driving too fast for road conditions, such as bad weather, a road under repair, or a poorly lighted area at night.